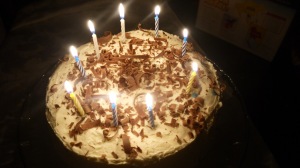 I dedicate this blog to my husband who by the way, is celebrating his birthday today. At my house, birthday’s are pretty special. We usually have a really big breakfast in the morning followed by opening gifts. Later that evening, we go out to dinner and celebrate with cake and ice cream at home. Sure, it’s fun to open gifts and cards. But for us, the best part is really just being together to celebrate another year of good times, and maybe even a few struggles, yet here we are another year later, doing it all together as a family. I will share with you my recipe for a White Butter Cake with Swiss Buttercream Icing. I will admit, trying this icing recipe for the first time had me on the edge, but after a few attempts it’s “a piece of cake.” Enjoy!

Heat heavy cream in saucepan over medium heat, bring to a boil, but do not scald.

Pour hot milk over chopped chocolate and slowly stir to melt the chocolate but avoid getting too much air into mixture.

In the bowl of an electric mixer, beat the yolks and salt until thickened (or until soft 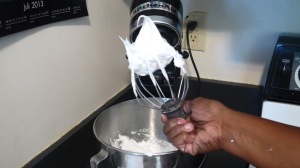 Meanwhile, combine the sugar, water, and tartar in a medium sauce pan and set over medium heat. Cook until the sugar is dissolved and the mixture reaches the 245 on a candy thermometer.

Recipe adapted from: The Kitchn

While eggs are still cold separate the eggs, placing the yolks in one bowl and the whites in 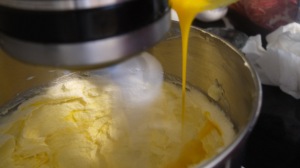 another bowl.  Cover the two bowls with plastic wrap and allow the eggs to come to room temperature before using (about 30 minutes).

In a mixing bowl whisk together the flour, baking powder, and salt.

In bowl of electric mixer, beat the butter until soft (about 1-2 minutes). Add 3/4 cup of the sugar and beat until light and fluffy (about 2-3 minutes). Add egg yolks, one at a time, beating after each addition. Scrape down the sides of the bowl.Add the vanilla extract and beat until combined.

With the mixer on low speed, alternately add the flour mixture and milk, in three additions, 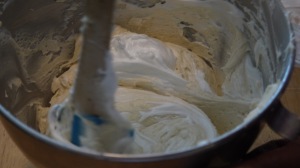 beginning and ending with the flour.

In a clean bowl of your electric mixer, with the whisk attachment, beat the egg whites until foamy. Add the cream of tartar and continue beating until soft peaks form. Gradually add the remaining 1/4 cup of sugar and continue to beat until stiff peaks form. With a rubber spatula gently fold a little of the whites into the batter to lighten it, and then fold in the remaining whites until combined. Do not over mix the batter or it will deflate. 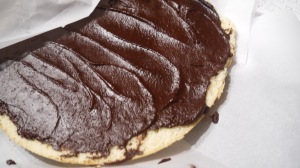 spatula or the back of a spoon. Bake in the preheated oven for approximately 20 -25 minutes, or until a toothpick inserted in the center of the cake comes out clean.

Cool the cakes in their pans on a wire rack for 10 minutes.  Place a wire rack on top of the cake pan and invert, lifting off the pan.

With a serrated knife slowly cut across one of the cake and divide into 2 halves. Ice one of the halves with the chocolate ganache filling. Ice the remaining 2 cakes with the buttercream icing and assemble with ganache filled cake in the middle. 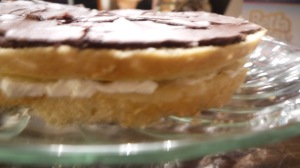